President Trump said on Fox TV News in an interview:

"Rush is irreplaceable, unique. He had an audience that was massive. & He would get up in the show and just talk. He wouldn't take phone calls, where people would call in every two minutes. That's sort of easy to do. He would just talk for two hours or three hours, just talk," Trump said. "That's not an easy thing to do. I once asked him, I said, 'Do you study for the show?' He said, 'Actually, I study very hard,' which a little bit surprised me. He was a fantastic man, a fantastic talent. People, whether they loved him or not, they respected him. They really did."

"There aren't too many legends around, but he is a legend," Trump told Harris Faulkner and Bill Hemmer.

"He had tremendous insight. He got it, he really got it," he added later.

Trump awarded Limbaugh the Presidential Medal of Freedom in February 2020 during the State of the Union Address. Trump said Limbaugh called the experience "the greatest honor of his life."

"Rush was very sick at the time. He was at a hospital in Boston & It was a very difficult thing for him to come into Washington from where he was, and he did it," Trump said. "

"The great Rush Limbaugh has passed away to a better place, free from physical pain and hostility," the statement says.

"His honor, courage, strength, and loyalty will never be replaced. Rush was a patriot, a defender of Liberty, and someone who believed in all of the greatness our Country stands for. Rush was a friend to myself and millions of Americans-a guiding light with the ability to see the truth and paint vivid pictures over the airwaves. Melania and I express our deepest condolences to his wonderful wife, Kathryn, his family, and all of his dedicated fans. He will be missed greatly." 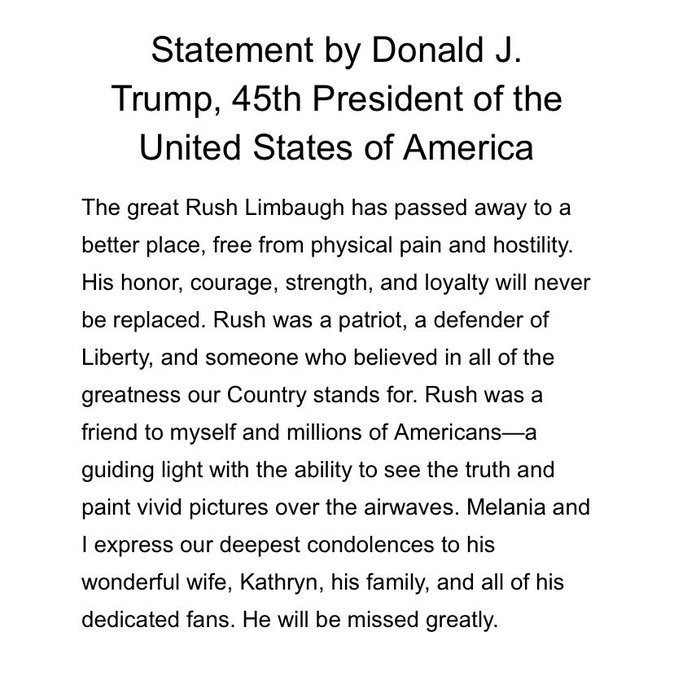