The Washington Post settled a defamation lawsuit filed by the parents of a Kentucky teenager over the paper's coverage of his encounter with a Native American protester in Washington last year, an event that set off a national debate.

The newspaper said on Friday that it had reached the settlement, but did not disclose the terms. "We are pleased that we have been able to reach a mutually agreeable resolution of the remaining claims in this lawsuit," said Kristine Coratti Kelly, a spokeswoman for The Post.

The parents of Nicholas Sandmann, a student at Covington Catholic High School in Covington, Ky., had sued the paper for $250 million, claiming that The Post had "targeted and bullied" him in its coverage of the incident. The amount reflected the sum that Jeff Bezos, the founder of Amazon, had paid to buy The Post in 2013.

A Kentucky high school student says he has settled a $250 million lawsuit with the Washington Post on his 18th birthday after he sued them claiming they made him out to be a racist following his stand-off with a Native American protester.

Nicholas Sandmann, a student at Covington Catholic High School, tweeted that the news outlet had settled the defamation lawsuit on Friday, which also happens to be his birthday.

Sandmann filed lawsuits against the Post, CNN and NBC after claiming the outlets vilified him following his stand-off with Nathan Phillips, an American Indian activist, at the Lincoln Memorial in Washington in January 2019. 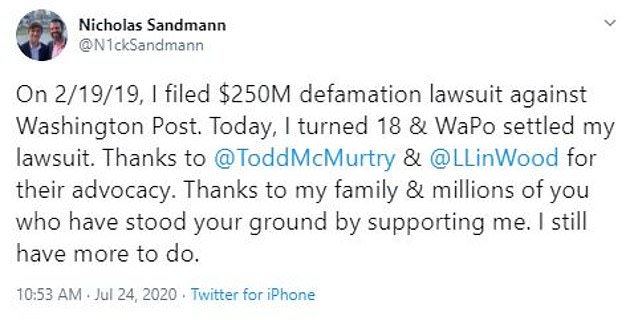